The museum began in 1986 with a C-47A that was rejected as “beyond salvage” by other museums. Today it stands immaculately restored, complete with D-Day invasion stripes, as it was when it served with the 61st Troop Carrier Squadron in World War II. Its extensive combat history is meticulously documented with photos, artifacts, and memorabilia donated by former crew members. This plane, “Turf & Sport Special,” was the centerpiece of a reunion in July 1990, that included the D-Day pilot, aerial engineer, and three of the 82nd Airborne Division paratroopers who dropped into St. Mère-Église on 6 June 1944—46 years earlier.

Few aircraft are as well known or were so widely used for so long as the C-47 Skytrain. Nicknamed “Gooney Bird,” the aircraft was adapted from the DC-3 commercial airliner which first appeared in 1936. The first C-47s were ordered in 1940 and by the end of WWII over 10,000 had been procured for the U.S. Army Air Force and U.S. Navy. They carried personnel and cargo, and in a combat role, towed troop-carrying gliders and dropped paratroops into enemy territory.

The most widely used military transport in WWII, the C-47 also saw service with the U.S. Navy as the R4D and with the Royal Air Force as the Dakota.

After WWII, many C-47s remained in USAF service, participating in the Berlin Airlift and other peacetime activities. One hundred C-47J aircraft were re-engineered by Douglas and incorporated new wings; a new, taller vertical tail; modified landing gear; and more powerful engines. They entered U.S. Navy service under the designation C-117D.

During the Korean War, the C-47s hauled supplies, dropped paratroops, evacuated wounded, and dropped flares for night-bombing attacks. In Vietnam, the C-47 served again as a transport but it was also used for a variety of other missions which included flying ground attack, reconnaissance, and psychological warfare missions. The AC-47 “Spooky,” a heavily armed gunship version of the C-47, was equipped with three side-firing 7.63mm Miniguns and was nicknamed “Puff the Magic Dragon.” The last C-47 was retired from the U.S. Air Force in 1975. 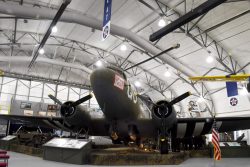 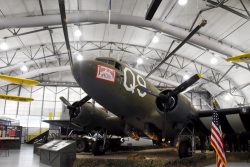 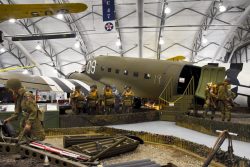 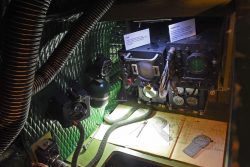 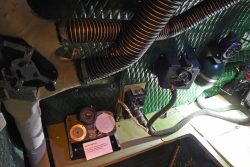 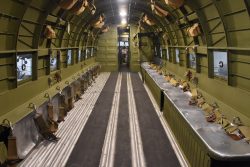 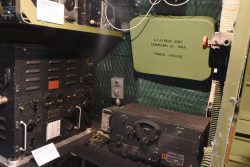 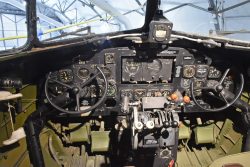 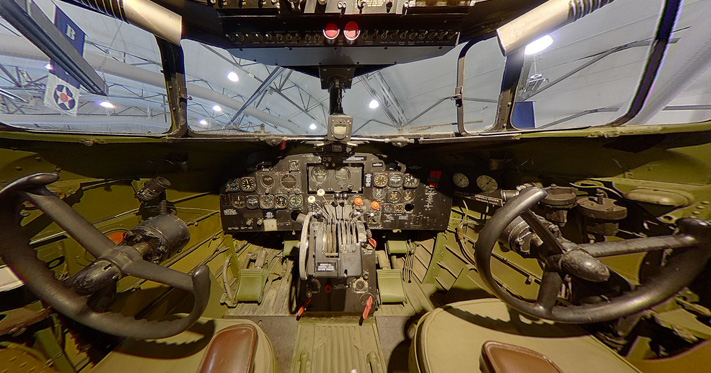 View inside our C-47A Skytrain →

Without a doubt, my dad, TSGT Donald E. Lapp, worked on this aircraft while stationed at Wheelus. He is in heaven rehabbing now. Thanks for the great work on this C47. Hope to visit sometime.

I have a soft spot for the C-47 having spent from March 1968 through September of 1969 as assistant crew chief and flight engineer on C-47 43-49680 in Vietnam. I was attached to Detachment 1 460 TRW stationed at Tan Son Nhut AFB near Saigon. Our mission was material and troop transport for 7th Air Force Headquarters.

What a historical aircraft. I was a paratrooper in the Army Reserves with 11th SF Group 1979-1982. My deceased father was a career pilot in the USAF and flew these birds, but mostly C-54’s out of Rhein-Main Air Base April 5 – Aug 1949 during the Berlin Airlift – Operation Vittles. His diary says he visited Wiesbaden several times and may have seen this aircraft.
Cheers,
Steve, COL, USA (Ret.)

My father Flight Officer George T. Ryan was “Pilot in Command”, Dum Dum Airdrome, India November, 17, 1944. He flew C-47 and C-53 flying from the India China Division 1305th AAF Base. He was awarded many commendations including the “air Medal” after completing 25 flights over the Himalayas in China. In 1946 had a total of 4500 flying hours of which about 200 are actual instrument. I have his “Flight Record” and “Itinerary”.

Additional history of my dad, his mission and location would be appreciated. Anyone having a father with the same experience may contact me, through this site.

C47 serial number 242895 was shot down over the English Channel on d day. My wife’s uncle was in that aircraft. The only photos we have of the airship is the tail section with the serial number and a hand painted #4 just ahead of the door. I am building a replica and search to see if there were any other letters or drawings on the airship so that I replicate authenticity. You guys have access or maybe photos of that aircraft that might help me? Advise? His name was corporal Jack Mattz

Jack E. Mattz was one of the pathfinders who were aboard #42-92845. They ditched in the channel and were rescued by H.M.S Tartar.

Looking for the serial number of the C-47 assigned to the U.S. Military Group in the Dominican Republic around 1963.

My father William Joeseph McBreen was a c-47 load master crew chief and carried both gliders and paratroopers into France and Italy . Also I was told he was in the South Pacific near the end of the war with Germay. Don’t know much more than that except he was discharged from Camp Blanding in Middleburg Florida before he went back home to Miami

While on vacation in the Dominican Republic on November 16th 2019 I found the fuselage, tail assembly, Wheel assembly and two Pratt and Whitney engines on a beach in pieces. Took photos of plane, interior serial number , 42-68733. Research on the D-Day website revealed the plane was used by the 314th Troop carrier Group out of Saltby, England on June 6 1944. It Was used to drop paratroopers of the 82nd airborne over drop zone N. It flew in serial 20 in the number 15 slot by a pilot, last name , McDonald no known first name. Commissioned to the the Army Air Corp on May 5 1943 scrapped for salvage on March 28, 1945.
Any information on what happened in between 1943 and 1945, and any information on the Pilot or crew would be appreciated.

We are a small group of veterans restoring Camp Toccoa at Currahee in Toccoa, Georgia. This is where they trained the paratroopers for D-Day jumps and others. Was also the basis for the book and HBO’s mini-series “Band of Brothers.”
We have acquired a C-47 aircraft like the ones these men trained to jump from.
Can you tell us the way and place to get parts? We have a few volunteers willing to help us rebuild the aircraft. It is going to be for static display only, so non airworthy parts are fine. Any help in this matter would be greatly appreciated. We are trying to get it ready for the 75th anniversary of D-Day on June 6th, 2019. We are a 501c3 non-profit orginization.
Thank you for your time,
Patrick Hall
Construction Coordinator
Camp Toccoa at Currahee Project
706-297-1385

Hi,
Please email Les Polley, our aircraft restoration chief, at les.polley@amcmuseum.org about the restoration of your group’s C-47. Good luck!

My late uncle went to Grave: Airstrip B-82 on the 26th September 1944 with the (108) 2nd Air landing Light -Anti aircraft Battery They were scheduled to fly to airstrip north of Arnhem on the 19th September In Gliders. This was cancelled due to the changing battle and he landed here ( only for one day) with the AFDAG from RAF Saltby; 2nd Air landing landed first, he was later wounded on the Island.

I am currently building a 1/48 scale model of this C-47 since it was one of aircraft carrying paratroopers of 1st Polish Independent Parachute Brigade to Holland during Market-Garden operation. Unfortunately you did not mention this fact in your historical dateline. The plane took polish paratroopers to Holland but “Turf” was one of the machines which came back to England due bad weather without dropping the men. I am currently looking for the chalk number which was applied to the plane for the polish drop. Unfortunately I did not find anything yet. Dear Museum staff can you help ?

Dear Mr. Mann, It is certainly possible that your father may have flown this aircraft,although I don’t have that info. The only information I have might be some help.

Maybe he will have the info you need.

Do you have any crew name information. From my family discussions it is possible my dad, Robert E Mann, was the pilot of this plane at some point during the war.

Currently we only have the original D-Day Jump Manifest for our C-47 which you can view here.