The glider has been faithfully restored using original blueprints. The right wing was not installed due to its considerable length, and the left wing was restored to half of its original length. The skin on the left side of the fuselage and parts of the wing structure were left exposed so you can see the intricate woodwork that went into creating the CG-4A glider.

Designed by the Waco Aircraft Company, the CG-4A Glider was the most widely used troop/cargo glider of World War II. Considered to be very suitable as a troop/cargo glider, the CG-4A carried 13 troops, or cargo loads that included a Jeep with a crew of four plus equipment, or a 75mm howitzer with its gun crew of three, ammunition, and supplies. The first examples of the CG-4A entered service with the US Army Air Corps during 1942, with production reaching its peak in 1942-43. CG-4As were used in the invasion of Sicily, Chindit actions in Burma, the invasion of Normandy and southern France, at Arnhem, and during the Rhine crossings. They were also used by the Royal Air Force, but only operationally in Sicily.

Sixteen companies built nearly 14,000 gliders; however, less than a dozen remain in the world today. The National Museum of the U.S. Air Force and the Air Mobility Command Museum are the only two Air Force Heritage Program museums that have a glider in their collections. 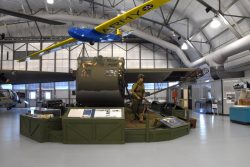 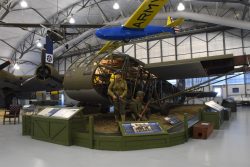 Do you have color pictures of cabin and vault where stored jeep and soldiers. Benchs are wood, walls grey. Tubes in green. But floor is wood or dark grey?
Also division panel is wood color or grey painted with wood door?

My father flew the CG-4A into Normandy on D-Day, Holland during operation Market Garden and Germany during Operation Varsity. Thank you for remembering the glider pilots. Many people don’t know the part they played or realize that gliders were used in World War II.

My grandpa rode in during Operation Varsity with the 17th 194thGIR

My father worked for WACO Aircraft in Troy, Ohio during WW II. His job was building the CG-4. Because the government felt his job was so important to the war effort, he was exempt from the draft. To keep up with the war requirements, WACO ran three shifts around the clock. Often, dad would work double shifts, driving the forty minutes from Troy to our home in Sidney, sleep for six hours, then drive back to work. As one would imagine, I am very proud of him.