The “Huskie” was used primarily for crash rescue and aircraft fire-fighting. It was in use with the U.S. Navy when delivery of the H-43As to the USAF Tactical Air Command began in November 1958. Delivery of the -B series began in June 1959. In mid-1962, the USAF changed the H-43 designation to HH-43 to reflect the aircraft’s rescue role. The final USAF version was the HH-43F with engine modifications for improved performance. Some -Fs were used in Southeast Asia as “aerial fire trucks” and for rescuing downed airmen in North and South Vietnam. Huskies were also flown by other nations including Iran, Colombia and Morocco. The H-43 Huskie set an altitude record of 10.000 m and numerous rate of climb records. During the Korean and Vietnam Wars, the Huskie flew more rescue missions than all other aircraft combined – with the best safety record of any U.S. military aircraft.

Unique aspects of the HH-43 are its wood constructed rotors. By warping the blades causes the aircraft to climb or descend. Operation of large tabs on the trailing edge of each blade causes the warping. 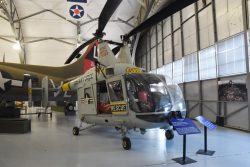 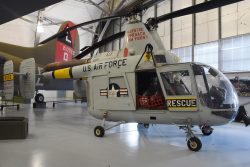 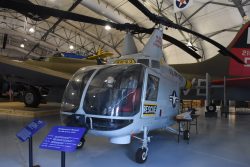 Air Rescue and Recovery used one when I was stationed at Cigli AB in Turkey.

OH WHAT A DAY THAT WAS 1965 OR EARLY 66 IN THE HILLS OF PLE KU I SEEN ONE IT CAME UP FROM A LOWER VALLEY OR FLAT LAND AND SURPRISED ME AS I WAS GOING AROUND A BIG TURN GOING TO ANKA THEN QUI NHON IT WAS SO QUIET ..IT SEEMS THE PIPE WAS VERY MUCH BIGGER AND SHORTER …I WAS WITH THE 542 MEDICAL CLEARING COMPANY…GOING TO THE DEPOT IN QUI NHON FOR MEDICAL SUPPLIES FOR THE SURGICAL HOSPITAL WE WERE ATTACHED TO. THAT EVENT HAS STAYED WITH ME …18TH MASH I THINK BUY THE AIRFIELD IN PLE KU …

I was a volunteer at the Travis Museum when this bird was on display there, before being moved to Dover.

Ronald Burke- I was an airborne firefighter on an HH43 in Thule, Greenland from February 1964 to February 1965. Capt James Black was commander of the unit while I was there.

I have been trying to do research on the Airborne Firefighters of Vietnam for about a year now. I have slowly discovered a small amount of research that I am trying to turn into a website. I would be very interested in getting some info from you if you didn’t mind?