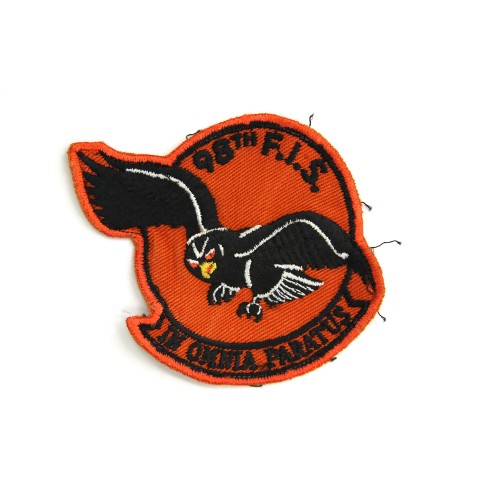 The 98th Fighter Interceptor Squadron was stationed at Dover AFB, Delaware, from from 1953 to 1963 as part of the Air Defense Command. It flew the F-89 Scorpion aircraft and later the F-101 Voodoo aircraft. The squadron was inactivated on 30 September 1968.

The squadron emblem used on the patch was approved in 1956. The orange patch depicts a black bird and motto, “In Omnia Paratus.”

You may be interested in...
Comments
Subscribe
12 Comments
Newest
Oldest Most Voted
Inline Feedbacks
View all comments
Tom Basore

My grandfather, Airman First Wampole, was in from 58-60. We’re travelling down memory road.

I was the crew chief of tail #309 . Was at Dover from June 1961 until we moved to Suffolk in 1963. Also spent time in Atlantic City during the Cuban Crisis. Remember some of my Sgts being Cunningham and SMSGT Mais(?)

I joined the 98th in 1962 in the Special Weapons section. Captain Weber was our OIC. Chief Master Sergeant Harney was our NCOIC.

yes! Iwas srationed there from Mar 1961 to Jun 1963, when the squadron was moved to Suffolk county NY

I was at Dover from Feb 1960 to Sept 1963. I was assigned to Base a Supply and was a member of the 1607 Supply Squadron. A1C Edward McFadden. How can I get the squadron patch?

Send an email to the museum store to see if they carry a reproduction: http://store.amcmuseum.org/pages/customer-service

Any one know a Lt Kennedy of the 98th FIS assigned to the Special Weapons section (MB-1 rocket) I also was assigned to that section, from 1958 to February 1960 would like to try and make contact with him??? A/1C Ronald Wampole