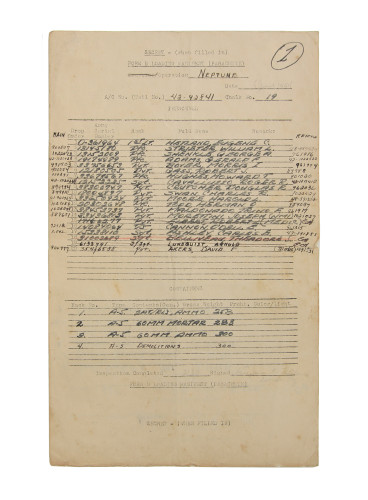 One of the most significant artifacts in the museum’s collection is a WWII D-Day Jump Manifest. It was donated by TSgt. Winfield “Bing” Wood who was an aerial engineer on the museum’s C-47 “Turf & Sport Special.” The manifest dated 5 June 1944 shows “Turf & Sport’s” serial number, 42-92841, and lists the names and serial numbers of the 82nd Airborne paratroopers who would be dropped at St. Mere-Eglise, France. It also lists the contents of the containers that were dropped. The reverse side of the document lists the names of the aircraft’s crew members.

My great uncle allegedly had a WW2 combat jump. From the scant information I can gather, it may have been into Nijmegen for Market Garden. All I have is his name. No unit or dates. Do you know where I might locate a jump manifest for the 1944 Market Garden jumps?