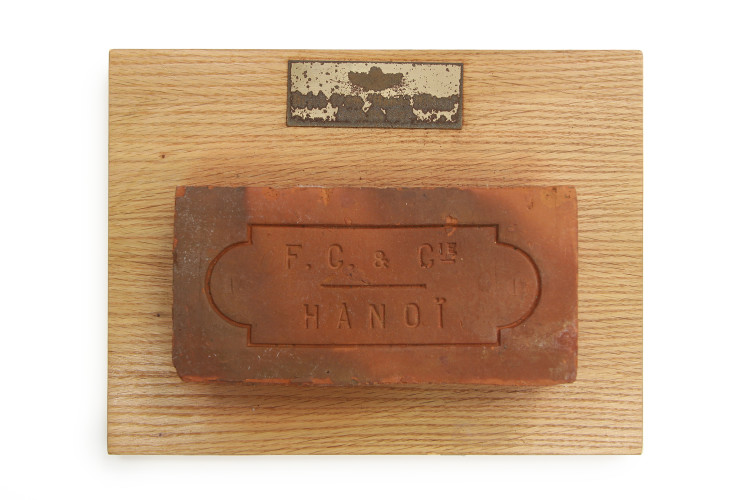 In 1997, U.S. Navy Rear Admiral Ming Chang visited Hoa Lo Prison in Hanoi. Admiral Chang retrieved the brick and presented it to General Reynolds who had been imprisoned there. Originally built by the French in the late 19th century, the prison came to be called the “Hanoi Hilton” by American POWs.

I was one of the first two U.S. diplomats permanently assigned to the Socialist Republic of Vietnam. I visited Hoa Lo Prison while it was being torn down in 1995 on numerous occasions. I know the bricks. I have a few myself. They are quite valuable. Some were hoarded by our POW/MIA Office and given as mementos to visiting VIPs. This is the real deal.

Very few bricks had a foundry imprint, and those were typically used around the lintels of windows. The vast majority of bricks had no imprint whatsoever. “F.C. & Cie/ Hanoï” was the most common of three possible imprints on those few bricks that bore an imprint, and is the most aesthetic, as the other imprints don’t identify the location.

Some Floridian businessmen once asked me to part with a brick for their congressman. I refused until I learned he’d been an inmate at Hoa Lo himself. A few months later I was surprised and delighted to find him named our first ambassador to the SRV. That was Pete Peterson, a fine gentleman. I also contributed one to the POW/MIA Museum in Andersonville, GA, in honor of our brave POWs and honored MIAs. God bless them all.