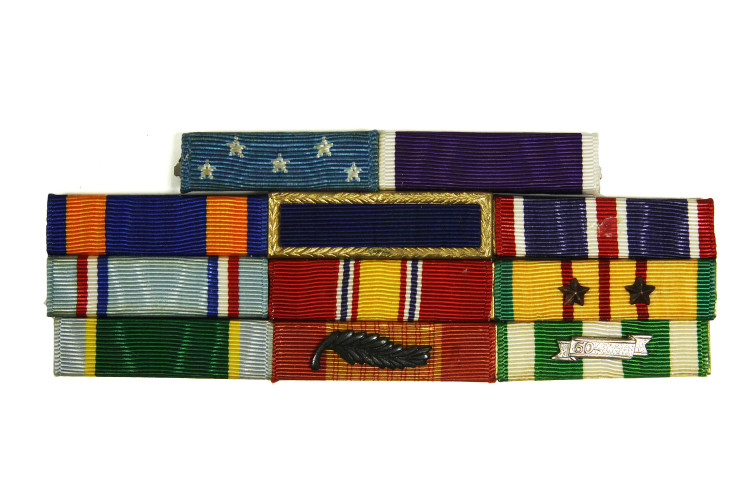 This ribbon bar belonged to Sergeant John Levitow. The top left ribbon is the Medal of Honor and next to it is the Purple Heart ribbon. Then an Airman First Class, he received the Medal of Honor from President Nixon on 14 May 1970 for his exceptional heroic actions while serving as a loadmaster on a C-47 Spooky gunship in South Vietnam on 24 February 1969. Below is the text of his Medal of Honor citation that describes his actions:

For conspicuous gallantry and intrepidity in action at the risk of his life above and beyond the call of duty. Sgt. Levitow (then A1C), U.S. Air Force, distinguished himself by exceptional heroism while assigned as a loadmaster aboard an AC-47 aircraft flying a night mission in support of Long Binh Army post. Sgt. Levitow’s aircraft was struck by a hostile mortar round. The resulting explosion ripped a hole 2 feet in diameter through the wing and fragments made over 3,500 holes in the fuselage. All occupants of the cargo compartment were wounded and helplessly slammed against the floor and fuselage. The explosion tore an activated flare from the grasp of a crewmember who had been launching flares to provide illumination for Army ground troops engaged in combat. Sgt. Levitow, though stunned by the concussion of the blast and suffering from over 40 fragment wounds in the back and legs, staggered to his feet and turned to assist the man nearest to him who had been knocked down and was bleeding heavily. As he was moving his wounded comrade forward and away from the opened cargo compartment door, he saw the smoking flare ahead of him in the aisle. Realizing the danger involved and completely disregarding his own wounds, Sgt. Levitow started toward the burning flare. The aircraft was partially out of control and the flare was rolling wildly from side to side. Sgt. Levitow struggled forward despite the loss of blood from his many wounds and the partial loss of feeling in his right leg. Unable to grasp the rolling flare with his hands, he threw himself bodily upon the burning flare. Hugging the deadly device to his body, he dragged himself back to the rear of the aircraft and hurled the flare through the open cargo door. At that instant the flare separated and ignited in the air, but clear of the aircraft. Sgt. Levitow, by his selfless and heroic actions, saved the aircraft and its entire crew from certain death and destruction. Sgt. Levitow’s gallantry, his profound concern for his fellowmen, at the risk of his life above and beyond the call of duty are in keeping with the highest traditions of the U.S. Air Force and reflect great credit upon himself and the Armed Forces of his country.