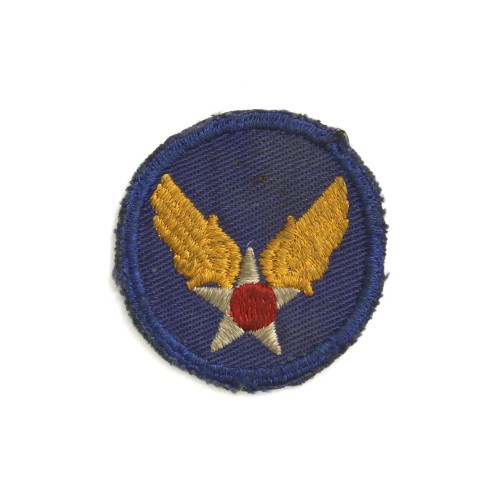 The U. S. Army Air Force patch is a winged star emblem embroidered in yellow, white, and red on a blue twill circle. It’s worn on the left shoulder of a uniform coat or shirt.  Known as the “Hap Arnold emblem,” it was approved for wear in 1942.

The U.S. Army Air Force (USAAF) was created in June,1941, as successor to the Army Air Corps. A component of the U.S. Army, USAAF provided military aviation and controlled its own installations and support personnel. At its peak size, there were 2.4 million men and women assigned with nearly 80,000 aircraft. In 1947 the USAAF became an independent service, the U.S. Air Force.

You may be interested in...
Comments
Subscribe
9 Comments
Newest
Oldest Most Voted
Inline Feedbacks
View all comments
Aaron Rudy

My son in laws Grandpa passed away he was in the Army Air Corps during WW 2. He left him a patch that has a cobra holding a bomb in its mouth. I was wondering if you had any information about this patch.

Likely the patch from the 864th bomber squadron of the 7th Army Air Force: https://en.m.wikipedia.org/wiki/864th_Bombardment_Squadron

Hello, I bought a hand painted leather patch a few years ago, it has a P-51 on it or what appears to be one painted on it. It has yellow background with 3 red lighting bolts on it behind the P-51. The patch was sewn on a jacket at one point in time. I’ve searched a lot and can not find anything close to it. Any ideas on what squadron it’s associated with?

Trying to ID my father’s WW2 patches to learn more about his service. One is an Army Air Force winged 9 on a blue shield background. The other is a green background 4 sided patch with gold eagle in a gold circle. Any help is greatly appreciated.

Those would be for the 9th Air Force and an honorable discharge insignia.

Trying to identify 2 patches on the front of an A-2 Bomber jacket that was a career army relative who served in the 15th. One patch is a chevron shape with a winged horse and a bomb in the background. The horse wing is red and white striped. The 2nd patch has a skull wearing a top hat With a bomb Underneath the jaw and what looks like 7K behind it? And something I can identify but is long with a handle and smoking at one end. I can send photos. We do know he flew tours over Europe (went down in Italy) and in the pacific. Thank you for any assistance.

The other could be the 716th Squadron, perhaps? Quite a few patches with skulls donning top hats riding or holding or flanked by bombs.

Why was the Hap Arnold Emblem awarded?