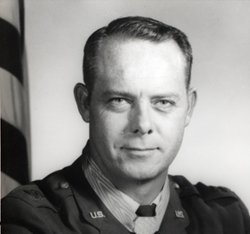 It was around midnight when the Rescue Center called the helicopter with instructions to return to Danang. The message was not well received by the Jolly Green Giant’s crew. The aircraft commander, Captain Gerald O. Young, called the center back asking permission to continue with the mission as the backup to a primary recovery helicopter.

Captain Young’s helicopter was part of a team that included another HH-3E, a C-130 flareship and three US Army helicopter gunships. The armada was headed toward Khe Sanh, a small city in the north-westernmost corner of South Vietnam.

That afternoon in the jungles to the southeast of Khe Sanh, a North Vietnamese Battalion had ambushed a small US-South Vietnamese reconnaissance team. Two helicopters were shot down attempting to rescue the survivors. As evening fell, the enemy felt certain that there would be another rescue attempt either that night or early the next morning. With the survivors as bait, they would lure the rescue force into their deadly trap again.

Shortly after midnight on 9 November 1967, the sounds of approaching aircraft brought feeling of hope to the survivors and anticipation to the North Vietnamese gunners. Flares from the C-130 cut through the darkness, illuminating the hillside below. Once again the rescue effort was underway.

Low clouds and poor visibility forced the choppers to operate within the range of the hostile guns and the enemy opened fire on the gunships. Reacting swiftly, the small helicopters evaded the withering fire and answered with a stream of rockets and machine gun fire. The two big Jollys hovered nearby waiting for a chance to make the pickup. Suddenly the ground fire ceased.

The gunships escorted the primary Jolly Green Giant into place alongside a steep slope when the hillside erupted into fire once more. The enemy gunners fired at close range from atop a nearby ridge and the hovering helicopter was an easy target in the ghostly flarelight. As three survivors clambered aboard, the Jolly broke out of the hover and wheeled away from the murderous barrage.

Leaking fuel, oil and hydraulic fluid, the bullet-riddled HH-3 struggled to reach altitude. She had been forced to withdraw before two wounded Americans and the remaining survivors could be picked up. Enroute to a successful emergency landing, the chopper’s pilot advised that rescue attempts should be suspended because of intense ground fire and the low fuel state of the gunships.

Though they could easily have chosen to escort their sister ship to safety, Captain Young and his crew decided to stay. This was the very reason that they had volunteered to come as the backup ship.

The crew had a plan. While Captain Young maneuvered the chopper into position, his copilot would direct the supporting fire of the gunships. As soon as the Jolly touched down, the rest of the crew would rescue the wounded survivors. It would be a team effort all the way.

With the soldiers aboard, Captain Young applied full power for takeoff as enemy riflemen appeared in plain sight. They raked the chopper with small arms fire and rifle-launched grenades. Suddenly the right engine sparked and exploded as the blast flipped the HH-3 on its back and sent it down the hillside in flames.

Captain Young hung upside down in the cockpit, his clothing on fire. After struggling to kick out the side window and release the seat belt, he fell free and tumbled 100 yards to the bottom of the ravine. Frantically he beat out the flames but not before suffering second and third degree burns over one-fourth of his body.

One man who had been thrown clear lay unconscious nearby, his foot afire. Young crawled to his side and smothered the flame and dragged the man into the bushes.

Meanwhile the rescue effort continued. Two A-1E fighters arrived in the area at 3:30 a.m. The prop driven aircraft could not make radio contact with the survivors. The A-1s circled above the burning helicopters and planned a “first light” rescue effort to begin at dawn.

As the sky lightened, the A-1s began to roll slowly over the helicopter graveyard. They were elated to see Captain Young emerge from hiding and shoot a signal flare. Young had been trying to warn them that the North Vietnamese would probably use him as bait for their flak trap but still there was no radio contact. Sensing a trap, the lead A-1 made several low passes but the enemy did not respond. Had they pulled out before dawn? There was no way to be sure. At 7 a.m. the A-1s were replaced by another pair of A-1Es as they returned to base for refueling.

For two hours there had been no opposition and the A-1 pilots had located five survivors near one of the wrecked helicopters. They escorted Army and South Vietnamese Air Force helicopters in for the pickup.

Circling back to the downed HH-3, the A-1s again located Captain Young and the unconscious survivor. They also spotted North Vietnamese troops moving back into the area. Fearing a repetition of the same scenario, the rescue forces could not risk bringing a nearby Jolly down for a rescue attempt.

The A-1s dueled with the enemy, inflicting heavy losses. The lead A-1 laid down a smokescreen between the enemy and the survivors and led the rescue choppers in for the pickup. Flanking the smokescreen, the North Vietnamese again opened fire. This time they scored, ripping the lead A-1 with armor-piercing shells and forcing him to depart for a safe area. The wingman laid down another smokescreen to shield Young and protect the rescue helicopters.

In the jungle below, Captain Young hid the wounded man. He would help the only way he could, by leading the enemy away from the crash site to take the pressure off the rescue force. In the meantime, the rescue helicopters were finally able to land a rescue party at the crash site. The one survivor was rescued and the bodies of the crewmembers were recovered.

Seventeen hours after the crash and six miles from the crash site, Captain Young finally escaped his pursuers. Only then was he able to signal a friendly helicopter. The ordeal was over.

Through his extraordinary heroism, aggressiveness and concern for his fellowman, Captain Young received the Congressional Medal of Honor from President Lyndon Johnson on 14 May 1968.