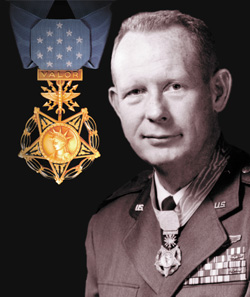 The first to be awarded the Air Force Medal of Honor was Major Bernard F. “Bernie” Fisher, for his heroism during the Vietnam War. The citation that accompanied his award reads as follows:

“For conspicuous gallantry and intrepidity at the risk of his life above and beyond the call of duty. On that date (10 March 1966), the Special Forces camp at A Shau was under attack by 2,000 North Vietnamese Army Regulars. Hostile troops had positioned themselves between the airstrip and the camp. Other hostile troops had surrounded the camp and were continuously raking it with automatic weapons fire from the surrounding hills. The tops of the 1,500-foot hills were obscured by an 800-foot ceiling, limiting aircraft maneuverability and forcing pilots to operate within the range of hostile gun positions, which often were able to fire down on the attacking aircraft. During the battle, Major Fisher observed a fellow airman crash land on the battletorn airstrip. In the belief that the downed pilot was seriously injured and in imminent danger of capture, Major Fisher announced his intention to land on the airstrip to effect a rescue. Although aware of the extreme danger and likely failure of such an attempt, he elected to continue. Directing his own air cover, he landed his aircraft and taxied almost the full length of the runway, which was littered with battle debris and parts of an exploded aircraft. While effecting a successful rescue of the downed pilot heavy ground fire was observed, with nineteen bullets striking his aircraft. In the face of the withering ground fire, he applied power and gained enough speed to liftoff at the overrun of the airstrip.”

“Major Fisher’s conspicuous gallantry, his profound concern for his fellow airman and his intrepidity at the risk of his life above and beyond the call of duty are in the highest traditions of the United States Air Forces and reflect great credit upon himself and the Armed Forces of his country.”