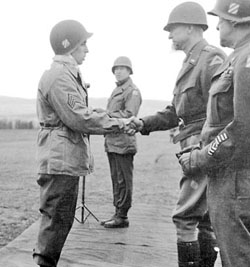 James P. Connor was born January 12, 1919 in Gander Hill, Wilmington, Delaware the son of James B. Connor. He graduated from St. Mary’s Commercial School and began working for the Allied Kid Leather Company at 12th and Popular Streets in Wilmington. In January, 1941 he was drafted into the U.S. Army and attended his basic training at Fort Bragg, North Carolina.

Connor’s medal dates from an invasion in southern France on the beach of Cavalaire on August 15, 1944. Immediately after landing Sergeant Connor’s lieutenant was killed by an exploding shell that also wounded Connor. Sergeant Connor, along with this platoon sergeant, then led his platoon across several thousand yards of mine ladened beach with mortar shells and 20mm flak guns screaming at them. Then the platoon sergeant was killed and command fell on Connor. Receiving a second wound on his shoulder and back, Connor pressed on with determination personally shooting two German snipers along the way. On Connor went leading his men toward a group of buildings honeycombed with snipers and machine guns as he received yet another wound. Hit in the leg, this time Connor was dropped in his tracks, but from his prone position he continued to give orders and direct his men.

Infused now with Sergeant Connor’s dogged determination, his men, now reduced to less than a third of its original strength of 36 men, outflanked and rushed the enemy with such fury that it killed seven, captured forty, and seized three machine guns. This action cleared the way for the rest of the landings. At 1044 General O’Daniel and his staff went ashore as the worst seemed to be over.

Connor was awarded his medal in March, 1945 and on May 7 of the same year, he was called to the White House to be honored by President Harry Truman.

Sergeant Connor, who died in 1994, was recognized at the AMC Museum with a gathering of family members and friends. The museum’s collection includes his dog tags, MOH certificate and his key to the city of Wilmington, DE. Dover AFB will name fourteen entry control points after Delaware Medal of Honor recipients – including Sergeant Connor.

I had the privilege today of meeting and conversing with Sgt. James P. Connor’s youngest son, Jeff, a retired teacher, at a school that I was serving as the building substitute. He was in a similar position. It is an amazing story of survival under hellish conditions to have undergone and went on with your life. I thank him for his sharing and it was a singular moment in my day at school today.
R. Nyhoff
Newark, DE

I saw his picture,without his name,and looked for his name on the Medal Of Honor web site. Took a chance on his name and was correct. That was one bad dude! Wish I could have met him. My Dad was in Europe during WW2. Thanks! Sgt Miller,82nd Abn.