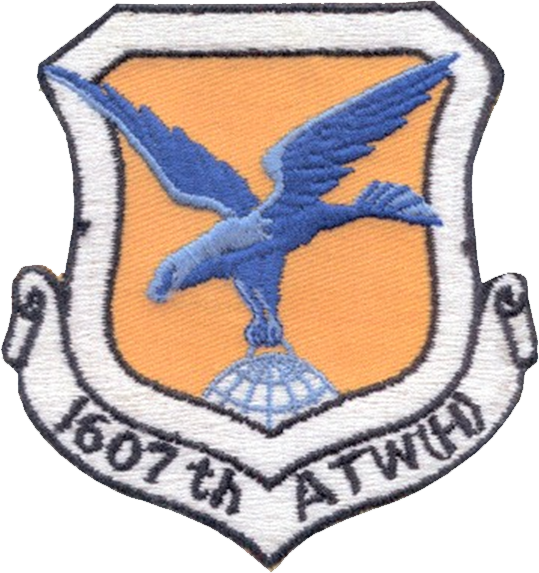 The airlift roots of Dover Air Force Base and the 1607th Air Transport Wing can be traced back to 1944 when, at Dover Army Air Field, the 4146th and the 125th Army Air Force Base Units were assigned the Douglas C-47 Skytrain, Lockheed C-60 Lodestar and the Beech C-45 Expediter. The prime mission of these units was rocket design and testing and pilot training respectively; therefore, there was that support requirement for the airlift of personnel and supplies. 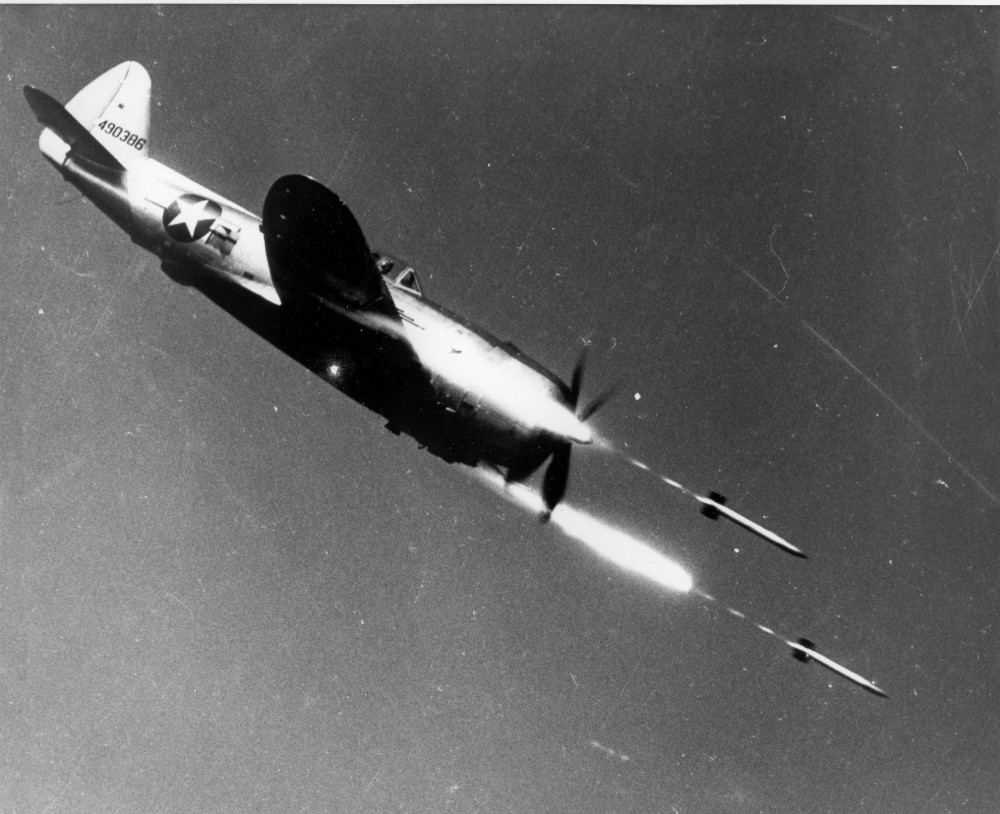 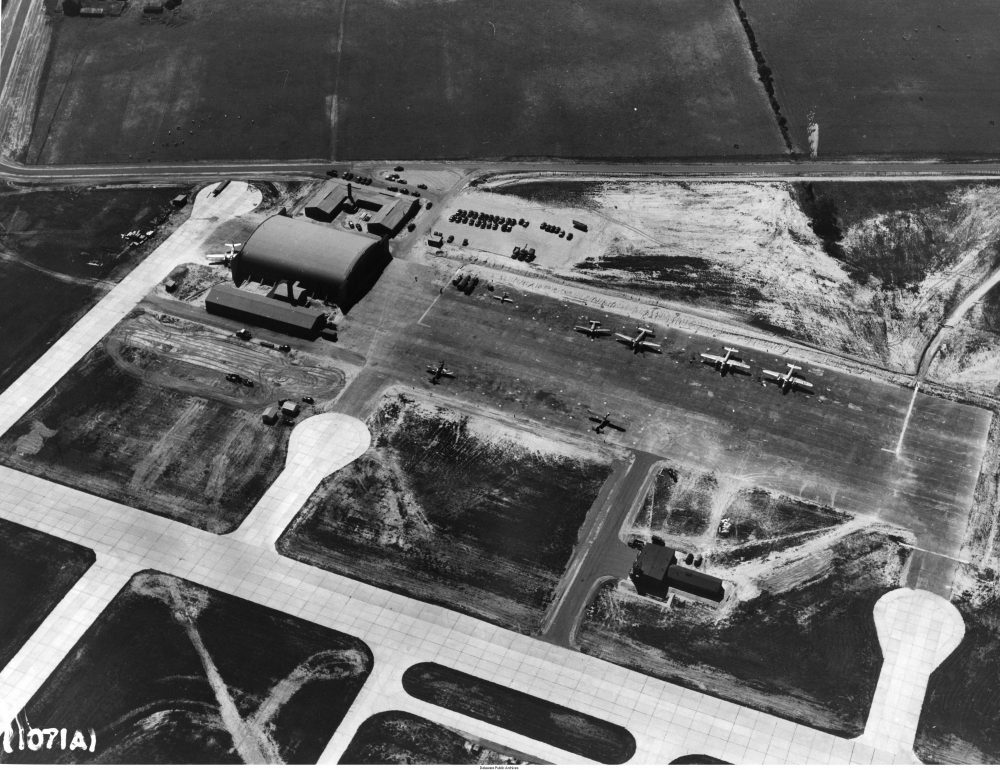 The base’s history, however, dates back to 17 December 1941, when the Federal Government leased the facility for military operations. At various times, the base was known as Dover Field, the Dover Municipal Airport, the Dover Airdrome, Dover Army Air Base and the Dover Sub-Base. The facility was being used for such operations as anti-submarine warfare, P-47 Thunderbolt pilot training, and for the development of air launched rockets. The latter would play a decisive role in the closing phase of the war. On 1 February 1944, it was officially known as Dover Army Air Field. The base would remain active until September 1946 when it was placed in a caretaker status. 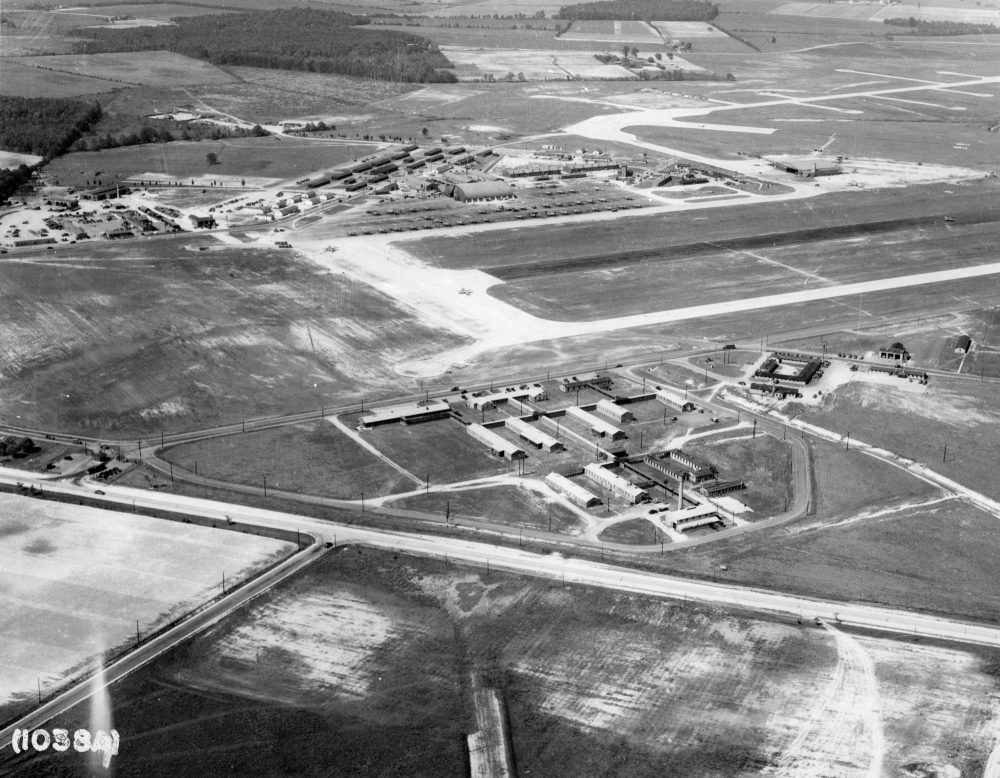 On 1 February 1951, the base was reactivated and assigned under the jurisdiction of the Air Defense Command (ADC). At this time the 148th Fighter Interceptor Squadron (FIS) of the Pennsylvania Air National Guard (ANG) was recalled to active duty and assigned to the base. On 1 February 1952, the 80th Air Base Squadron was activated at Dover to provide housekeeping duties for the four tenant units that had arrived on the base by that date. They were the 148th Fighter Interceptor Squadron, the 1737th Ferrying Squadron, Detachment 1909-6 Airways and Communications Services and Detachment 4, 9th Weather Group.

On 1 April 1952, the Military Air Transport Service (MATS) assumed command jurisdiction of Dover Air Force Base. Concurrent with this action, the 80th Air Base Squadron was relieved of assignment to ADC and assigned to MATS, with further assignment to the Atlantic Division (MATS), headquartered at Westover AFB, Massachusetts; which in 1958, was re-designated as the Eastern Transport Air Force (EASTAF) and moved to McGuire Air Force Base, New Jersey. In addition, congress appropriated $25 million to expand and transform Dover Air Force Base into a supplemental east coast port of embarkation for MATS and as a Foreign Clearing Base for ferrying flights headed to Europe, the Caribbean, and to the countries of the north. 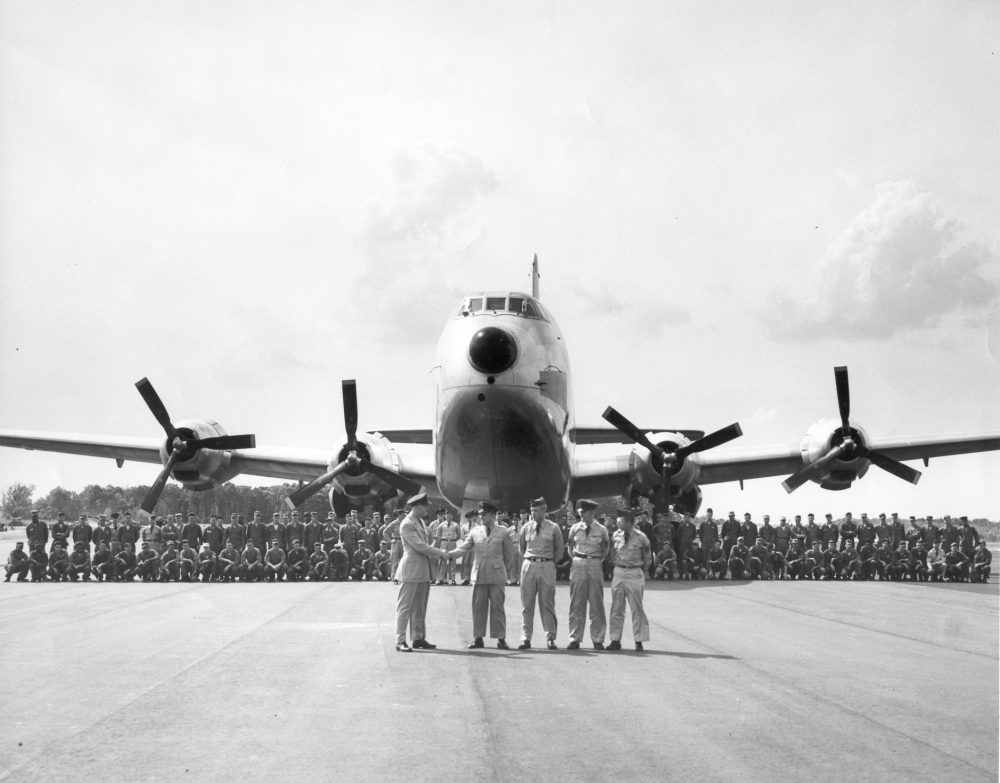 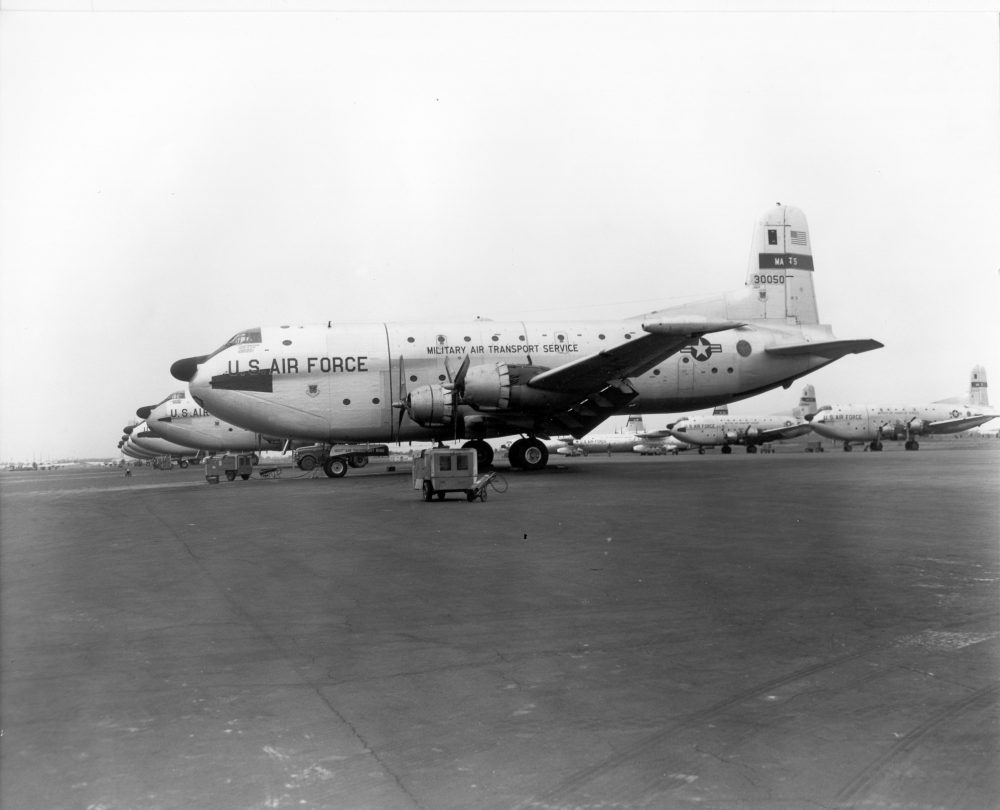 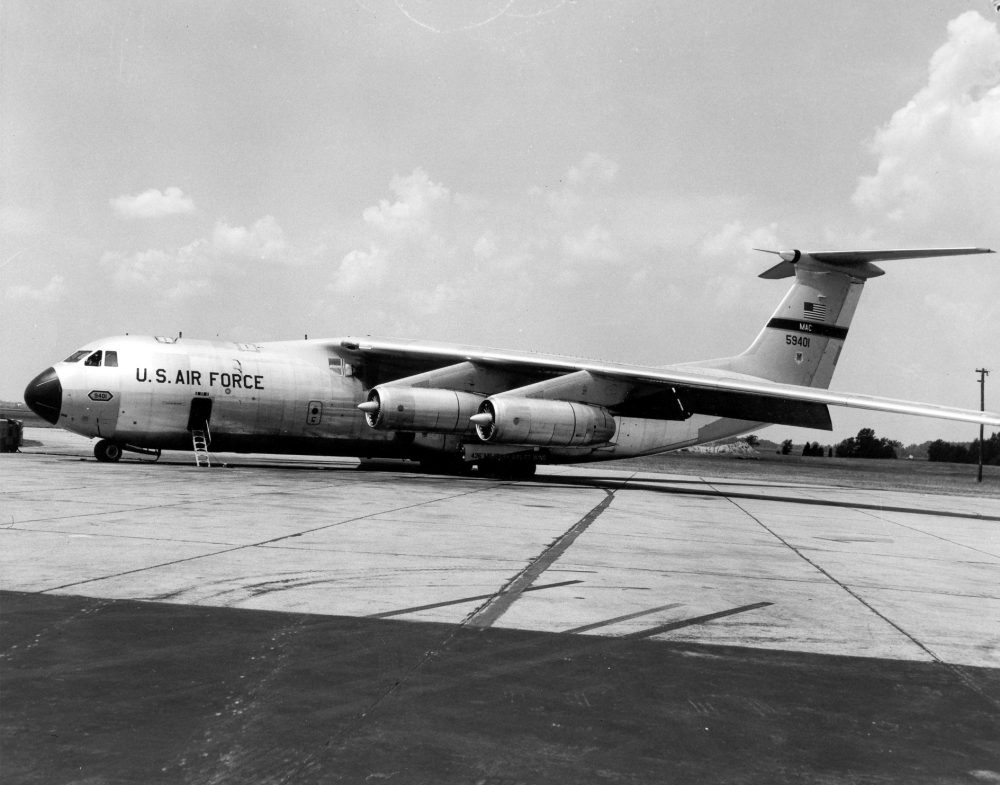 The initial mission of the 1607th Air Transport Wing (Heavy) was “to command, operate, administer and maintain Dover Air Force Base and such organizations, installations and facilities as may be assigned by proper authority for the purpose of transporting by air, personnel, material, mail, strategic materials and other cargoes for all agencies of the Department of Defense (DOD) and as authorized for other government agencies of the United States, subject to priorities and policies established by higher headquarters.”

The mission responsibilities of the Wing were later expanded considerably. In the following years, the 1607th Air Transport Wing assumed the additional responsibility for logistical airlift operations including unit deployment, airdrop supply, air landed supply, scheduled and nonscheduled airlift, as well as joint airborne operations and training to include the capability for airdrop of personnel and cargo.

As a unit of the Military Air Transport Service, the 1607th Air Transport Wing had its share of responsibilities in major joint mobility exercises and global operations conducted during the “cold war.” Examples include: Big Slam/Puerto Pine, March 1960, was an exercise that deployed 22,000 combat Army troops and 12,000 tons of gear from stateside bases to Ramey AFB and Roosevelt Roads Naval Air Station, Puerto Rico; Check Mate II, September 1961, involved the deployment of the 301st Airborne Division from Fort Campbell, Kentucky to bases in Europe; Southern Express, October 1962, a NATO exercise which involved airlifting troops from central Europe to northern Greece; Big Lift, October 1963, the deployment of a full Army division from Texas to Germany; The Cuban Missile Crisis, October 1962. In support of President John F. Kennedy’s decision to blockade Cuba, Dover Air Force Base was called upon to support the buildup of forces in the southeastern United States. The Wing and its aircrews worked at peak capacity airlifting troops and supplies from bases throughout the country to Florida and Guantanamo Bay. History shows that we were within 36 hours of a nuclear confrontation with the Soviet Union; the Congo Airlift, also known as Operation “New Tape,” was history’s longest lasting operational airlift, lasting 3 1/2 years, from 1960 to 1964; Operation Good Hope, September 1957, the airlift of arms support to Jordan. Forty vehicles equipped with 109 mm weapons were carried in five C-124s that flew in formation from Dhahran, Saudi Arabia to Amman, Jordan; Project ICE CUBE, May 1955, supported the construction of the Defense Early Warning Network “DEWLINE” in northern Canada; Polar Strike, January 1965, was conducted to evaluate U.S. STRICOM’s ability to reinforce the Alaskan Command.

During the years what seemed impossible to many was considered routine day-to-day operations to the aircrews of the 1607th Air Transport Wing. In December 1958, a Dover AFB C-133 airlifted the heaviest load in the history of aviation when it carried 118,000 pounds of cargo to an altitude of 10,000 feet, breaking the former world record held by a Soviet TU-104 “Camel”; on February 7, 1960, a Dover C-124 with a 15th Air Transport Squadron aircrew flew a record breaking non-stop flight from Hickam AFB, Hawaii to Dover AFB in eighteen hours and forty minutes; a C-124 of the 1st Air Transport Squadron was assigned temporary duty to the 54th Air Rescue Squadron at Goose Bay, Labrador to aid in the rescue of 26 passengers and 8 crew members of a Norwegian vessel ice bound off the coast of Greenland; in March of 1956, 22,000 pounds of emergency polio equipment and supplies were airlifted to Buenos Aires to help combat a polio outbreak; the AMIGO Airlift, mercy missions to Santiago, Chile in May 1960, when an earthquake literally re-made parts of that country; in 1962, the four month round the world tour of John Glenn’s space capsule Friendship VII ; many re-supply missions from Thule Air Base, Greenland to the northern most weather outposts at Nord and Alert, both within just some 500 miles of the North Pole; the delivery of a telepectograph to the Ascension Islands in support of the space project FIRE. It was the first time such an instrument was airlifted as a complete unit; the airlift of supplies and emergency equipment to Alaska after an earthquake struck that state in March 1964; the presidential support mission of John F. Kennedy, in July 1963, when he spoke the famous words “Ich Bin Ein Berliner,” at the Berlin Wall. These are but a few of the approximate 75 significant events added to the normal day to day global airlift operations, of which the 1607th Air Transport Wing was involved. During its twelve-year history at Dover, the 1607th ATW accumulated 1,076,483 transport flying hours or an approximate equivalent distance of 235 million nautical miles. 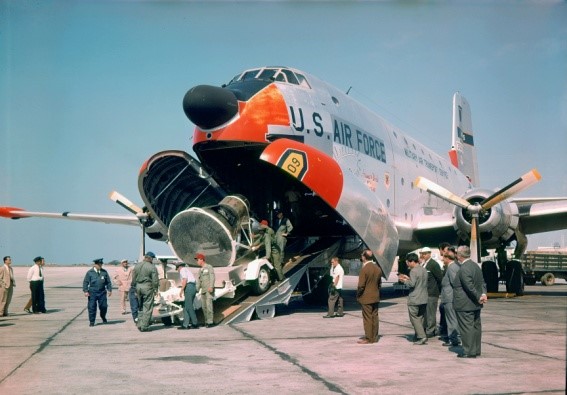 There were 70 heavy transport aircraft assigned, on 1 January 1966, with over 8,000 military and civilian personnel. Its C-124 Globemasters, C-133 Cargomasters and the newly acquired C-141 Starlifters maintained a D-Day state of readiness to airlift men and material for the United States and allied military forces whenever and wherever needed. In addition, the Wing’s mercy airlifts to nations suffering natural disasters, and its United Nations airlift effort in the Congo and other areas of the world, bolstered US national policy in the cold war.

The AMC Museum’s archives and the 436th Airlift Wing’s History Office were indispensable in compiling this flying history of the 1607th Air Transport Wing.

I was at Dover AFB 1961-1963 and was part of the crew that was involved with the C-133 fire on the ground. I was 18 at the time and had to go in and remove the WRM kit which took several trips inside while it was leaning on its wing and on fire. I was very scared but it was my job and I did it. Shortly after I went to France on Project Short Spurt. While in France got my permanent orders to Alaska. The Air Force was the greatest experience of my life.

My father, Samuel W. Shaw, was stationed at Goose Bay. I think he was a Tech Sergeant? My brother was born there in May of 1961. I was a baby/toddler and my sister attended kindergarten. We have pictures in snow suits and my mother tells us stories. Our time in the Air Force as a family was some of our best years. We left from Goose Bay to Arizona, and then from Arizona to Texas where my Dad was medically discharged after a heart attack. He always missed the Air Force and his guys.

I was an Aircraft&Engine mechanic at Dover AFB from 1959 to 1962 servicing the C-124 and can truly say I enjoyed my time in the AIR FORCE. IM 82 now and still look back on those days when my grand kids ask about what I did when I was young. With that training upon discharge I worked at Pratt & Whitney in experimental engine build- up

I was assigned at Dover AFB, and the 1607 Squadron from December 1957 till April 1961. Lived in a house Trailer at Kings Cliffe Trailer Park, owned by retired Base Commander Col. Anderson. We were young, I 21 and wife 20. Wh had one child born at Dover AFB hospital in April 1958. It was a great experience for us. Our Neighbor Charles Fluehardy was a crew chief on an F89in the ADC command there also. A lot of great friends.